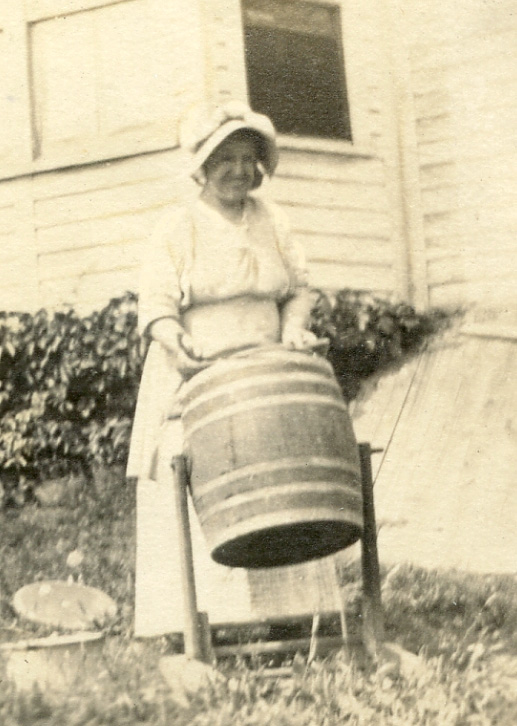 In the late 1800s and early 1900s milk fat, or cream, was the main reason for milking cows. Calories and nutrients are concentrated in the cream, and in the days before refrigeration, butter and cheese were less perishable than milk. Farmers sold their milk to the Newfoundland Creamery or other nearby creameries where the cream was used for making butter and cheese. The skim milk that was left after the cream was separated was either returned to the farmers for feeding livestock, or simply discarded.

Guernsey and Jersey cows produce milk with the highest amount of cream, and Holstein cows produce milk with the least amount of cream. Many of our local farms had a few Guernsey or Jersey cows mixed in with their Holstein herd to increase the percentage of cream in the milk that was collected each day and sold to the creamery. It takes between 2.3 and 3.3 gallons of whole milk to make one pound of butter.

In the home and on the farm, butter-making was a weekly chore. One of the earliest ways to separate the cream was to pour the milk into shallow “setting” pans. After letting the pans sit for 36 hours or more, the cream, being lighter, rose to the top where it was lifted off by hand using a small skimmer. It was hard to do a lot of milk at one time and even under ideal conditions, and this method left at least 10 percent of the cream behind. The invention of the mechanical cream separator in the late 1800s made this job much easier. Cream separators relied on centrifugal force rather than gravity. Sears introduced an efficient, affordable tabletop model for home use in 1902, and it remained a mainstay of their product line until 1947.

Once the cream was separated from the milk, it needed to reach room temperature and ripen, or sour slightly, before it could be churned. This could take up to 24 hours. After ripening, the cream was poured into the churn, allowing head room for it to froth and expand during churning. In the photograph above, Flora Rohrbacker is shown using a barrel butter churn on the Rohrbacker farm in Greene Township. The cream had to be agitated at a steady pace. If done too vigorously, it would reduce the quality of the butter. The task of churning the butter was often delegated to the children of the family. As the churning progressed, small globules of fat would separate from the cream and a ball of butter would form. After the butter was removed, the leftover buttermilk was often used for baking.

The ball of butter was then rinsed in cold water until the water ran clean. Once rinsing was complete, it was transferred to a bowl and any remaining buttermilk pressed out by hand or with a butter paddle. If all the liquid was not squeezed out, the butter would rapidly turn rancid. At this point in the process, salt could be added if desired. The butter was then ready to be stored in a tightly covered crock. Many local farmers would make enough butter to barter for other items at the general store, or to sell to nearby boardinghouses. The finished butter was sometimes put into molds and stamped with a decorative design on the top. If the butter was to be sold, the stamp often identified who had made the butter.

“Butter was a cinch to make in summer when the cows were eating grass—their milk made good sweet butter, and I sold the extra to Silver Birches.”  Ethel Singer (1911–2000)