The following article by Barry Moore first appeared in The Greene Hills of Home in September 2014.

A couple of years back my wife and I bought a retirement home on Crestmont Drive that had been built in 1949 by Wardell and Elizabeth Robacker. I spent my early life growing up in Gouldsboro and decided that Newfoundland had retained a similar small-town feel. Soon after moving into our new home, I joined the Greene-Dreher Historical Society. Even though I was familiar with the area I thought that becoming a member would provide a means to learn more about the community and offer me a chance to participate in activities of interest to me.

Jeanne Brown, the President of the Historical Society, asked if I would be interested in helping to remove an antique washing machine from an attic in LaAnna and reassembling it at the museum. The washing machine had belonged to Emory and Amanda Houck Gilpin and had been donated to the society by their great-granddaughter Jill Porter. As I especially like older mechanical devices, I thought that having the opportunity to be involved in the project would be very interesting.

When I first saw the washer I was quite surprised. I had expected a model with either a copper or galvanized steel wash drum, but this machine was actually much older and had a wooden barrel-type drum. It appeared to be complete, but was not fully assembled. Further disassembly was required in order to remove it from the attic. After separating the machine into manageable parts, I was able to lower the components down the outside of the house without damaging the side of the building.

I did some research on how best to clean and preserve the wood without altering its appearance in a negative way. The most frequently recommended process was to liberally soak the wood with lemon oil, let it set for a day and then carefully wipe off the contaminants that the oil brought to the surface. I carried out this process four to six times until the wood looked clean and had been restored to it original luster. Gouges, rough edges and cracked stays were left in their “as found” condition. The oil process also proved to be helpful in preserving and improving the legibility of the label on the outside of the drum. The label identified it as a Model 1900 Gravity Washing Machine.

In its day, the Gravity Washer was considered a labor-saving device! I did some research and found a 1907 ad for “The Six-Minute Washer,” which was helpful in explaining how the machine worked. The very simple but effective mechanism found under the drum provided a back and forth, oscillating motion while at the same time causing the drum to move vertically up and down. The source of power was typically the woman of the house. The operator would sit beside the machine and, using the handle on the side of the drum, would rotate the drum back and forth. If you were to examine the movement of the water as it circulated through the clothes in the tub, you would see little difference when compared with a modern day machine. The biggest difference would be the source of power—electrical power with temperatures and times regulated by small computer chips, versus the common sense, manually-operated machines of the 1800s. Around 1920 the washer got an upgrade with the addition of an electric motor under the drum area. While this provided a more convenient power source, it also created a significant danger. Leaking water often caused a short circuit and, sadly, fatal injuries were not uncommon.

Even though modern washing machines bear little resemblance to the Model 1900 Gravity Washer, the basic process is the same. Warm water is circulated around and through the clothing, soap is introduced to float the solids from the fabrics, and gravity pulls the particles downward so they can be rinsed away. If you would like to save on your electric bill, I have seen these old-fashioned washers for sale on eBay. Happy washday! 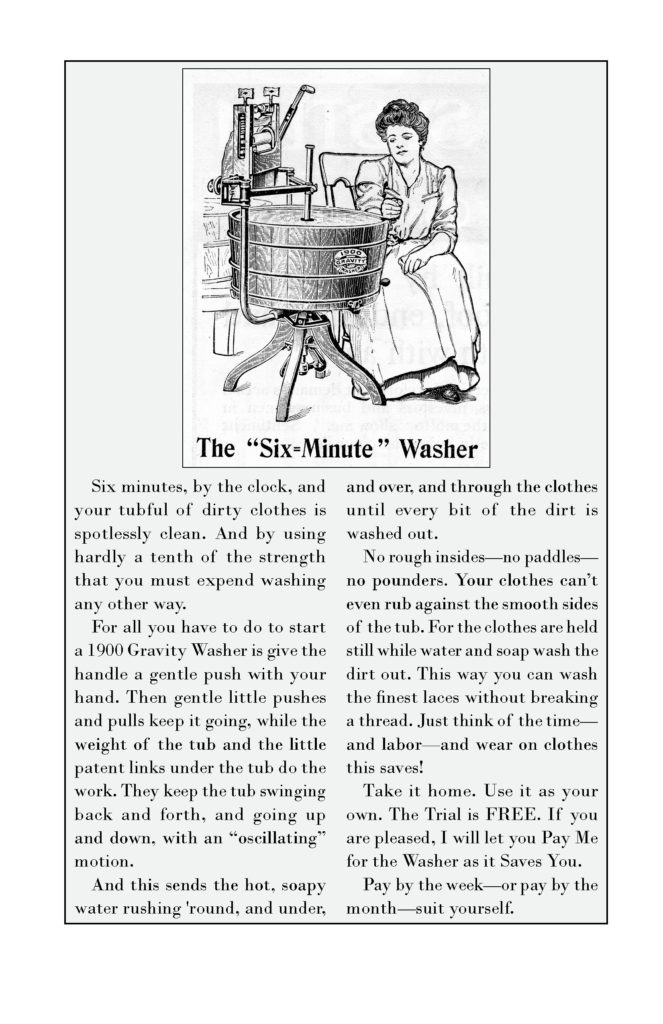